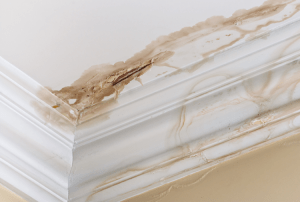 The “domino effect.” No one wants the domino effect to apply to them when the “game” is water damage in condos. So often in apartment and condo buildings, when one upper level unit suffers a water loss, the surrounding units and those underneath are also affected in quick succession. Water seeps through and pours down the walls, saturating ceilings and floors and anything else in it’s path. Wet seeks dry and will continue to do so until the water is shut off.

This unfortunate domino effect was witnessed first hand by the property owners living in a condo building in West Palm Beach, FL. As is so often the case in these situations, a supply line broke in the kitchen of an upper level unit. And down the water fell, affecting bordering condos one by one until a total of eight condos had been affected by water damage.

What were the effects of this particular domino effect? Joe Taylor Restoration was called out after-hours for emergency service. There were a few content casualties: one laminate floor and many toe kicks and baseboards had to be removed. Amazingly, however, an engineered wood floor, carpet in several units and hallways, as well as the dry wall and the rest of the condo furnishings were saved by the technicians’ fast assessment and execution of their action plan. This action plan involved the deployment of more than ten extra large dehumidifiers and over sixty air movers, as well as the use of rescue matt kits.

Although this domino effect was not at all fun for several condo owners in West Palm Beach, FL, Joe Taylor Restoration took care of the problem. The technicians saw to it that the water was effectively removed. In the end, all eight of the units were cleaned and restored, avoiding a potential mold problem and other issues that could have otherwise taken effect in the future.

If you are dealing with water damage in condos or any other type of property, contact Joe Taylor Restoration for the best in emergency restoration services.